Last night, I binge-watched two and a half episodes of Sherlock and I have to say, I didn’t enjoy it nearly as much as I would have liked. The episodes I watched in full were the one where [SPOILERS] Sherlock tried to outplay Moriaty, which ended with both of them dying in the process. Second episode was where John was dealing with the trauma and drama of having found out Sherlock was actually alive and they both tried to stop the tower of London from blowing up.

I already knew from reading fanfiction laden with spoilers that Sherlock faked his death, but it still sucked to see it happen. What sucked even more was the fact that Sherlock let John Watson suffer for that long, while basically everyone but him knew he was alive. I think John deserved a lot more than what Sherlock gave him in those two years.

I mostly had issues with the episode where Watson found out Sherlock was alive. First issue, and I’m sure you all took notice of this too:

First thought seeing this: Some people look good with mustaches. John, you are not one of those people.

Moving on, we find out Sherlock has spent the last two years rooting out Moriaty’s network along with his brother. Not to sound sarcastic here, but it looks like Sherlock was doing a fine good job without John Watson. Of course, after all his exploits, Sherlock is looking to come back to London and get back to business with John. I’m sure Mycroft is good for a few government infiltrations here and there, but there’s nothing like having someone who would actually wish you weren’t dead. 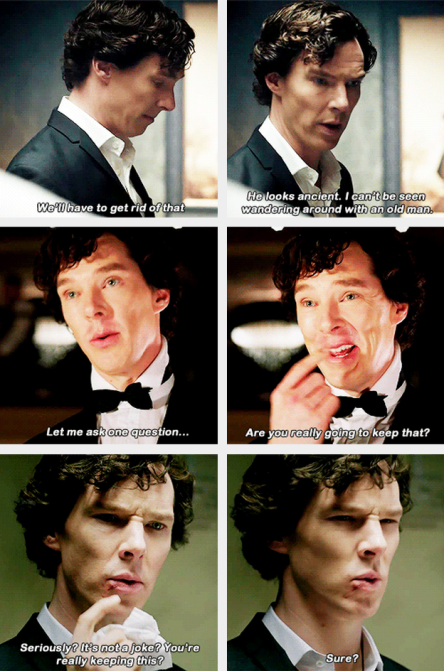 Anyway, we get to enjoy watching Sherlock pretending to be a French waiter and raging on the inside when John doesn’t recognize him despite him dropping several hints. The moment of truth comes when just as John is about to ask Mary* to marry him when Sherlock waltzes him and steals the show. He expects John to be thrilled with seeing him, you know, not dead, but things don’t go quite as planned.

John finally gets sweet vengeance as he tackles Sherlock not once, not twice, but three times, as he deals with the fact that his friends let him suffer for two long years before revealing he wasn’t dead.

I almost feel bad for Sherlock here when he realizes his friend doesn’t seem to want him back and has chosen this (insert really cool analyzation sequence) clever, beautiful woman in his stead. And it seems for once, Sherlock isn’t judging John’s taste in girls.

So what’s left to do, but find a different Watson? He chooses Molly, the specialist registrar who works at the morgue and had this crush on him. Molly feels honored to have been chosen, however, it’s apparent that Molly might as well be John for all the times Sherlock mistakingly calls her that. And, good for Molly, she knows this and tells Sherlock she can’t be his partner, especially since she’s got a boyfriend.

Here comes the part that really disturbs me. Sherlock tells Molly that Moriaty made one mistake and that was ignoring the one person he most cared about.

Molly. Molly is the one person he cares the most about.

“Well,” I thought. “That oughta be a lie.” After all, Sherlock had insulted Molly so many times in the past episodes and now he’s saying he cares for her? Bullcrap! Sherlock would never say that, particularly because it doesn’t make any sense. Why would he have this random burst of emotion towards Molly to say thank you for helping orchestrate his fake death and not feel anywhere near the same emotions when revealing himself to John?

Unfortunately, this is canon, and it seems Sherlock actually does like her to some extent. I don’t think the writers were this through when they wrote that bit. This may just be me, but I don’t think I’ll ever fully accept Sherlock x Molly as a real thing.

Anyway, skip some parts, John gets kidnapped and we eventually see he’s under bonfire wood that about to go up in flames with him in it. Mary gets a text telling her that John is in trouble and she hurries to Sherlock and they dash off on a motorcycle to go save him. They cut it real close saving him and those poor souls who lit the bonfire will forever have it in their memories that they almost killed a man.

We have to assume this little rescue improved the relationship between Sherlock and Watson, because not too much later, we see John (mustache-less, thank goodness) and Sherlock back at their flat on Baker Street, already gearing towards another mystery. This time, it’s a good old fashioned bomb plot. Not very exciting, but it’s good to see the two of them back in action together again all the same.

Asides from that, we get three examples of how Sherlock could have died. At the beginning of the episode, we get a jarring and elaborate plan where Sherlock switched his body’s with Moriaty’s and there’s a bungee and a mask involved. Another plan would be the body that jumped off the building was a dummy and Moriaty hadn’t died at all. In fact, Moriaty was in on it with Sherlock. In fact, Sherlock and Moritaty had somehow fell in love. The third scenario was that Sherlock had assembled a team to catch his fall and had faked being dead with a squash ball and fake blood to make it more realistic, all within a very specifically timed plan to trick John.

While I found them all very far-fetched, it’s shown that the first two were theories made by a few who believed all along that Sherlock was alive. I was really so relieved to find out Moriaty was dead. I didn’t need a repeat of The Woman.

But the third scenario was a bit confusing. Sherlock was the one who confirmed it and who was he telling? Anderson. Why Anderson of all people? The idea going around is that the plan Sherlock “confirmed” was actually one of Anderson’s own speculations. So we never really know how Sherlock died. Dang it.

Then, surprise, surprise, it turns out Sherlock had already turned off the bomb and basically forced Watson to forgive him. What’s more, he was laughing at John’s fear. I found that unacceptable. The entire episode, Sherlock was playing with John’s feelings to twist them to his needs. That’s not how you treat your best friend.

Well, this review’s done. I liked the episode, but it left me feeling very unsatisfied with the characters as a whole. I hear it’s the show’s low point and I’m hoping that true.

*Okay, and I wasn’t terribly thrilled that this new character, Mary, was introduced, but I guessed it only made sense for John to actually hang on to a girlfriend once Sherlock wasn’t taking all his time. She kind of grew on me by the end of the episode.