Which is maybe the most political statement I’ve ever made here and I apologize.

What I’m getting to is that I am a huge fan of the Jane Foster Thor comics:

What’s not to love? The art is stunning literally all the time, plus we know who Jane Foster is already.

For those who aren’t in the Marvel comic loop (because there are some who claim to be but only know what they do from the movies), Jane Foster was Thor’s ex-girlfriend who was dying of cancer. Thor’s hammer was conveniently on the moon for her to pick up, and when she did, the wig she had snatched was given back to her in lovely forever-windblown golden hair.

And I kind of want to steal away her helmet. 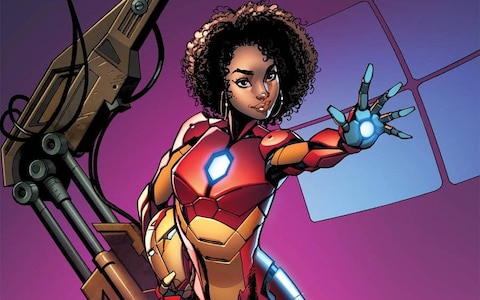 Who is she, you are asking?

Well, I don’t know. All I know is that she’s from Earth 616 and her superhero name is Ironm– I mean, Ironheart.

Remember what I said about gender equality?

They’re both girls, and they’re both close-replicas of the original male superheroes. But no, I’m not here to dump on feminism, even though I hate hearing the word “empower” at this point.

I’m saying I know as much as I do about the Jane Foster Thor comics because I bothered to pick it up. The fact that Thor is my favorite classic Avenger helped, but I saw Jane Foster and was hooked.

I mean, who doesn’t wanna read about the lady who dumped the god of thunder? Plus, she has cancer and she doesn’t have it anymore when she’s in Thor-mode, but when she goes back to civilian mode, all the chemo’s been undone? Now she has to choose between being a superhero, or shortening her life?

This has been a paid promotion article, sponsored by Marvel.

I look at an Ironheart comic, and walk past.

Because all I see is some random girl who’s decided to be a rip-off of Iron Man. And I’m never cool with rip-offs of originals. Spinoffs or reimagining?

Those are chill. We should encourage those, since they give you good-quality content on Netflix.

But rip-offs, using a known name to bait people into buying something, doesn’t work. It didn’t work (for me, at least) with Riri Williams.

First impressions matter, Marvel writers. We know who Jane Foster is, so she can get away with having Thor’s hammer (for the short period of time she did). But if you’re gonna have a character named Riri Williams who no one recognizes, she better be the start of her own superhero.